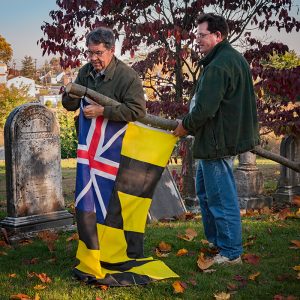 The flag that we fly at our Fall Visitation is the Maryland Militia flag of the French & Indian War era, known as the Calvert Arms-Grand Union flag. The Maryland militia used this flag in 1755 at the battle of Duquesne, where they were under the leadership of General Braddock and Colonel George Washington. It may have been the first non-British flag to go into battle with George Washington. It was, apparently, the only Maryland flag until the current one was officially adopted in 1904.